The center of the geek universe

I'm still on Chevy's side. He was right about the decline of quality in season 3 and remembering how his character got turned into a walking senility punchline then, I wouldn't be surprised if he is right about the cranked up bigotry of Pierce too. (Not to mention that he didn't call anyone by the n-word, but wondered how long it will take until Pierce would start using it.)

i think it's well established that pierce's character is a bigot from early on on the show. the question is whether his bigotry is written in a clever and funny way, the way it's been in the past, or whether they've gotten too obvious and uncreative with it. i guess we'll find out on October 19, whenever that is.

chevy's displeasure with the show is also pretty well-established from early on too. it's amazing he's still around, they must have him locked into an ironclad contract. of course his dropping of the n-word has to be taken in context, and there's nothing racist about that context, if anything he was pointing out his unhappiness with how racist he thinks the writing of his character was getting. but he REALLY does not seem to like being on this show.

Well, he really likes his co-stars. He never said one bad thing about them and whenever he started bitching about how much he hated working on the show, he usually ends his rant with praising his fellow cast mates and how much fun he has with them. And to be honest, if you look at all those interviews, he only talked about how much worse the writing got over the years and I totally agree with him. He pretty much praised the early scripts and started bitching from season 3 on. (I know, it seems to be much longer.) If I would be in his position, being in a show that started out good, but then became too busy jerking off at its apparent cleverness ("Yes, let's make another gimmick episode!" fapfapfapfap), while all characters become more and more horrifying caricatures of what they were in the beginning (especially after my character had a great arc in season 2), I would react like him.
But to be honest, I think if there is a season 5, he won't be there anymore. He either gets kicked or leaves by himself.

with all this lucasfilm/star wars talk, you all have missed the REALLY big news to come out yesterday...

well, i guess this was inevitable


this past season started off REALLY rough. it got better as it went along, but definitely felt different from the previous harmon seasons. hopefully he can bring back what made the show special before.

I'm incredibly excited by this, but also super-confused. Firing someone from a TV show and then re-hiring them (and then kissing their ass) is completely unprecedented, at least as far as I can remember.
Top

Ribbons wrote:Sony Wants Dan Harmon to Do the Commentary for Season 4 of 'Community'

I'm incredibly excited by this, but also super-confused. Firing someone from a TV show and then re-hiring them (and then kissing their ass) is completely unprecedented, at least as far as I can remember.

watching him slag off on the show and how awful it was because he wasn't involved, is about the only thing that would make me want to rewatch this season anyway. 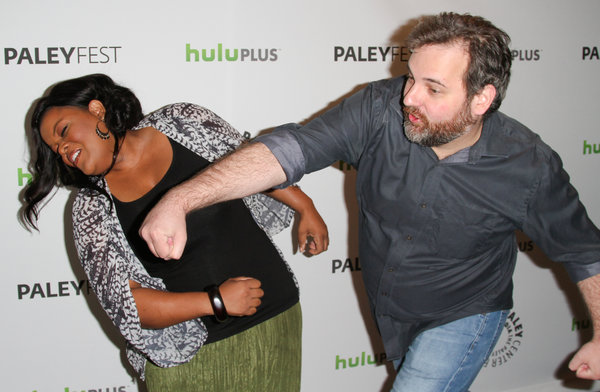 So yesterday I somehow stumbled across the final three season 4 episodes on TV and to my own surprise I really liked them! Season 3 really made me hate the show, by turning every character into an annoying caricature of their former self and relying too much on cheap gimmick plots, so after episode 4x01 was more of the same, I finally gave up. But even the extremely gimmicky final episode got it all right and felt more like something out of season 2. I guess I have to watch the rest of the episodes now too. (And then stop watching again, because the man who ruined the show in the first place return for the next season.)

How That Came To Be
Top

also, i'm not the biggest abed fan, but danny pudi deserves an oscar for the nic cage bit in last week's episode. his breakdown in the classroom was the funniest thing on a television show i've seen since this:

that scene will now be my touchstone for hilarious comedy on tv.

holy crap this episode will be amazing

boy, she really Britta'd that PSA.

It's been cancelled. I guess audiences REALLY kept watchting for Chevy Chase?

sadness. but after losing both chevy and donald glover, it's been a bit of a struggle this season. still not as bad as last season, but even the return of dan harmon didn't really turn things around.

at least we got that awesome g.i. joe episode before the end though.

Yeah, the second half of this season wasn't that great. It seemed to lose a step after Donald Glover left. Although I *did* really enjoy the last (evar?) episode. You have to admire the balls on Harmon for his not-so-subtle takedown of the NBC execs... which could be why the show got the axe, come to think of it.
Top


..... on something called Yahoo Screen.
i've never heard of Yahoo Screen.
so i'll probably not be able to watch it. or if i do, it will be on a crappy little ipod screen or something.
still it's like that saying "it's 5 o'clock somewhere." now we can say "Community is still playing somewhere."

Has anyone else been watching? I'm digging the tone of the season thus far. It's a little looser, a little weirder, and that's a good thing. They're not writing little emotional cliffhangers for each commercial break and the final scenes have become truly bizarre. I love it.


We're all too busy watching and discussing Daredevil.
Top

sosorry is like the Chevy Chase of the zone

Peven wrote:sosorry is like the Chevy Chase of the zone

I'm SoSorry, and you're not.

Peven wrote:sosorry is like the Chevy Chase of the zone

I'm SoSorry, and you're not.

Just because I love and miss Community:

So the cast of Community united with Habitats for Humanity to bring hope and happiness during this lockdown. In the first video, the entire cast does a table read from season 5 (including Troy! But not Chevy

The second video contains a Q+A from Variety about what they remember, where they are now, and one or two questions from special friends

And if you STILL want more Community, Joel McHale and Ken Jeong's podcast, The Darkest Timeline, convinced the cast to stick around and share more stories.

Troy and Abed back on TV!
"Alright Shaggy - you and Scooby head over that way. The girls and I will go this way."
Top

This is not a drill, people!